Towards Gender Equality in Film Production

The gender equality perspective permeates everything that is done at the Swedish Film Institute: from production funding to the choice of films to promote from the archive, to the recruitment of new personnel. One of the Film Institute's goals is to lay the foundation for gender equality in film production, a labour that is able to progress with the aid of concrete action plans.

At the Cannes Film Festival the new report on gender equality from the Swedish Film Institute, 406 Days – It’s About Time, was launched. The report looks at gender disparity in the development and production process and shows that the average female-led fiction feature spends over one year longer in development than projects led by male filmmakers.

An international panel discussed strategies and tools for creating equity and equality in film production the post-pandemic film industry, and looked at ways to close the gender gap.

The event was hosted by the Swedish Film Institute with support from the Marché du Film. 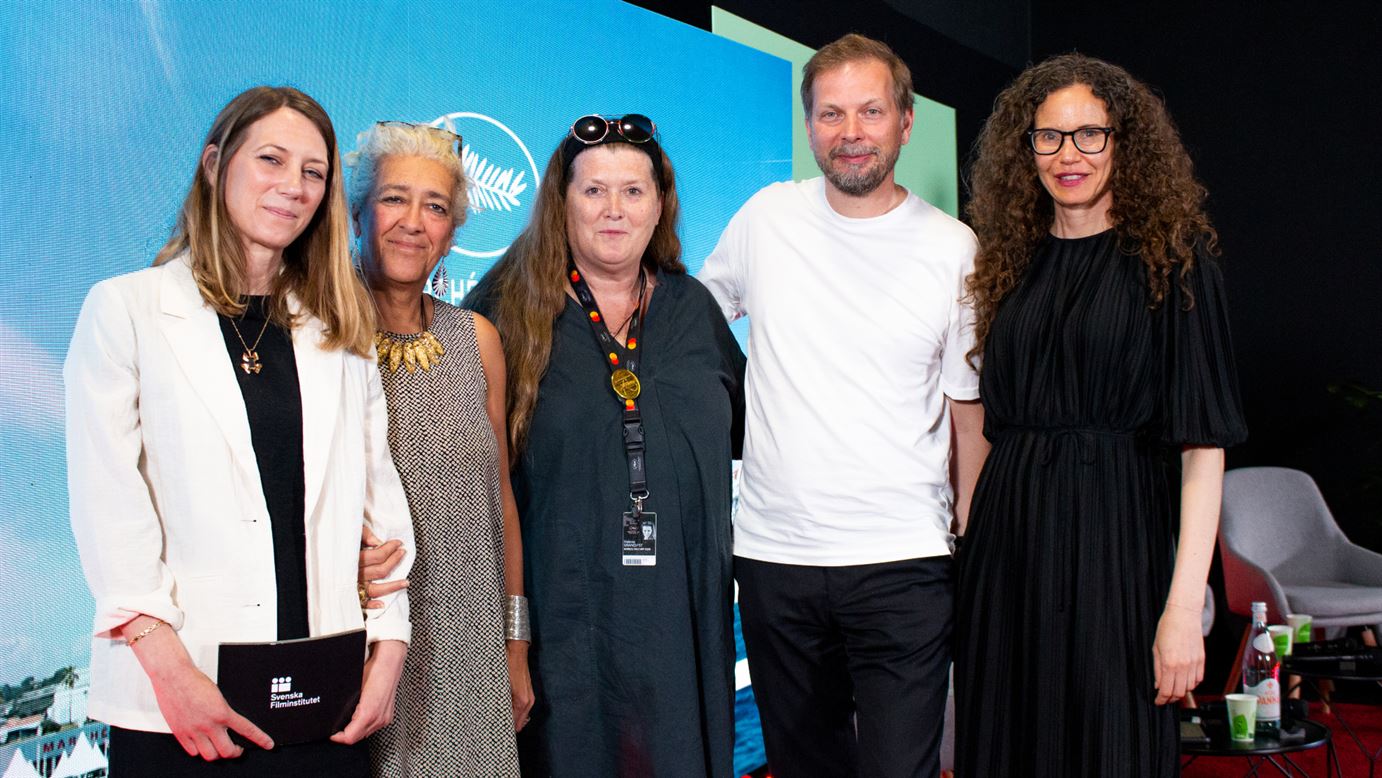 Anna Serner, CEO of the Swedish Film Institute, in a conversation about intersectionality in practice, with guests who are shaping the landscape of the film industry.

The conversation highlights tools and best practices that the audience can incorporate into their businesses daily and strategically, focusing on strategies and methods for working towards equity and against discrimination in film and television.

The event marked the international launch of the Swedish Film Institute’s report Which Women?. See below.

Which Women? is a qualitative research study on the working conditions for older women and women who are being racialised, in the Swedish film and TV industry. The report indicates that the industry is at risk of losing relevant talent and missing out on important stories by continuing to reproduce stereotypical social imagery. The Swedish Film Institute therefore concludes that diversity and increased representation poses an untapped potential in Swedish film, both commercially and qualitatively.

The basis of the report consists of 19 in-depth interviews with established female actors, directors, producers and screenwriters at the ages 27 to 66. Among other things, the interviewees in the study point out:

At this year's EFM Horizon during the Berlin International Film Festival, The Swedish Film Institute co-hosted the panel 50/50 A Roadmap for the Future, discussing the road ahead for the 50/50 by 2020 movement.

Anna Serner then joined the panel to continue the discussion with Dame Heather Rabbatts (DBE, Chair of Time’s Up UK), Delphyne Besse (Co-Founder and Co-President of France's Collectif 50/50) and moderator Wendy Mitchell (Contributing Editor, Screen International and Screen Daily).
The conversation highlighted the experiences and insights of key change-makers who have created innovative and inclusive initiatives to redress the imbalances, but also critizism towards the institutions and industry players that lag behind. 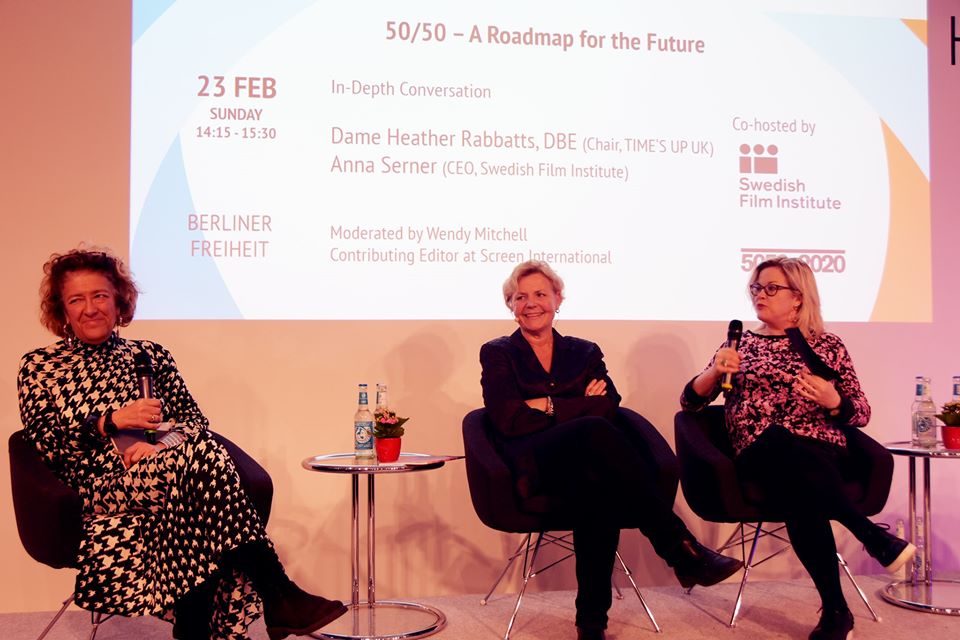 At this years Marché du Film – Festival de Cannes, the Swedish Film Institute co-hosted a webinar on inclusion in the film industry, as a follow up on the progress of the 50/50 by 2020 movement, Creating the New Normal: Intersectionality in the Film Industry, featuring Anna Serner, CEO Swedish Film Institute; Dr. Emilia Roig, Founder and Executive Director, Center for Intersectional Justice; and Franklin Leonard, CEO, The Black List. Moderated by Kaleem Aftab, journalist.

During 2019 the Swedish Film Institute has focused on supporting and strengthening other actors in the industry, both in Sweden and internationally. Within the network for European Film Institutes, Efads, the CEO of the Swedish Film Institute, Anna Serner, has chaired a gender parity goup which had as its goal to get all film institutes to start counting. The labour has been successful, with  the European Audiovisual Observatory making it part of their mission to collect gender data in the key positions director, scriptwriter and producer.

In Sweden, the Film Institute has taken part in and supported events organized by Women In Film and Television (WIFT), for example at the festivals in Berlin and Cannes.

The Swedish Film Institute's web site Nordic Women in Film has been translated into English and is used by international groups as a model when working out ways to highlight female film makers. 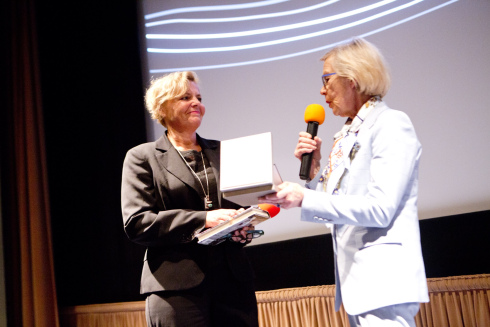 Anna Serner, CEO of the Swedish Film Institute, received the Mill Valley Film Fest’s Mind the Gap Award in October, out of the hands of Barbro Osher. The honor is given to “persons whose work and leadership inspires the movement towards greater equality in film”.

With support from the Cannes Film Festival, the Swedish Film Institute arranged the event Take Two: Next moves for #MeToo. Together with the Swedish Minister for Culture and Democracy Alice Bah Kuhnke and the French Minister of Culture Françoise Nyssen, the CEO of the Film Institute, Anna Serner, invited to an event concerning the work against sexual harassment and assault and the misuse of power against women - with focus on the film industry. With a total of five Ministers of Culture from different countries attending, the event marked a meaningful shift at an international level for equality in the film industry.

More information about the topics and the participants can be found in the clip below.

In cooperation with the Berlin International Film Festival the seminar Closing the Gap was arranged. CEO of the Swedish Film Institute Anna Serner participated in a panel with representatives from WIFT Germany and WIFT Nordic. The purpose of the panel was to discuss how quality will be ensured through premiering equality and diversity at the financing stage. 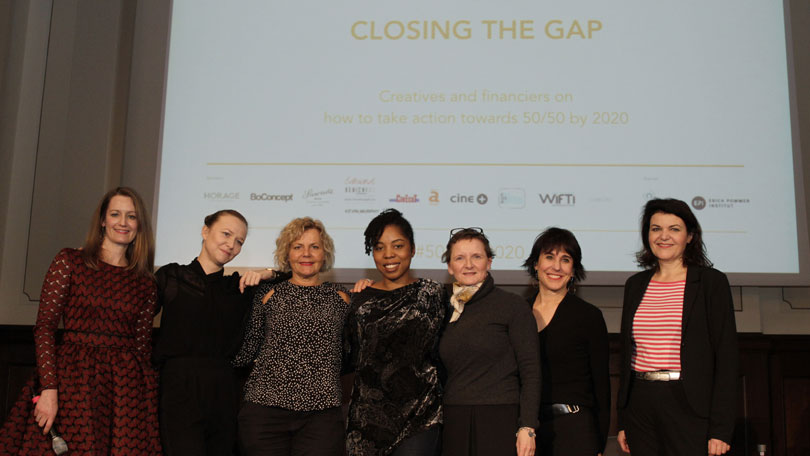 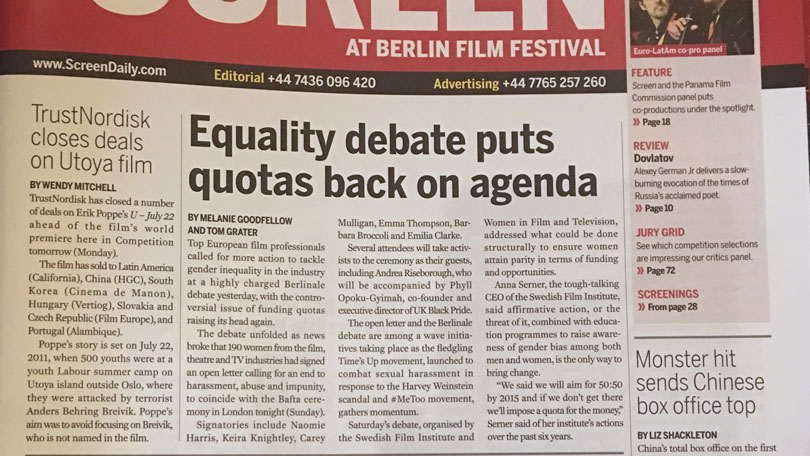 The international magazine Screen wrote about the event in their Berlin edition.

The Swedish Film Institute and WIFT Nordic presented “50/50 by 2020 – Global Reach”, a seminar at the Cannes Film Market regarding how the work on equality is proceeding outside Sweden’s borders. CEO of the Swedish Film Institute Anna Serner, discussed with directors Agnieszka Holland and Jessica Hausner about creating film and quality, while representatives from Norway, Iceland, United States Canada spoke about their initiatives for a more equal film industry. 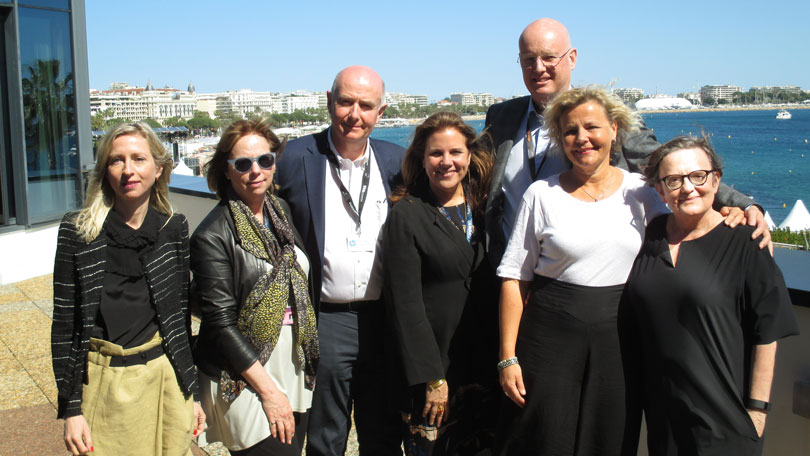 In 2016 the Swedish Department of Culture gave the Film Institute the mission to lead the work on equality with a seminar in Cannes under the slogan "Fiftyfifty by 2020" aiming to raise the international interest in the issue, based on Sweden's prominent position in gender equality in film production.

The minister of Culture and Democracy together with the CEO of the Film Institute Anna Serner invited to a panel consisting of Emilie Lesclaux, director, Chiara Tilesi founder of the production company We Do It Together, Ruben Östlund, director, and Roberto Olla, CEO of Eurimages. Together they discussed conditions for a more equal film industry. 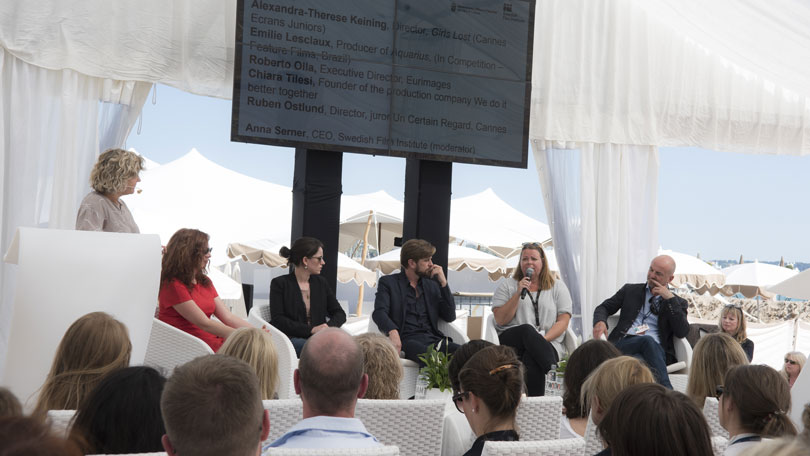 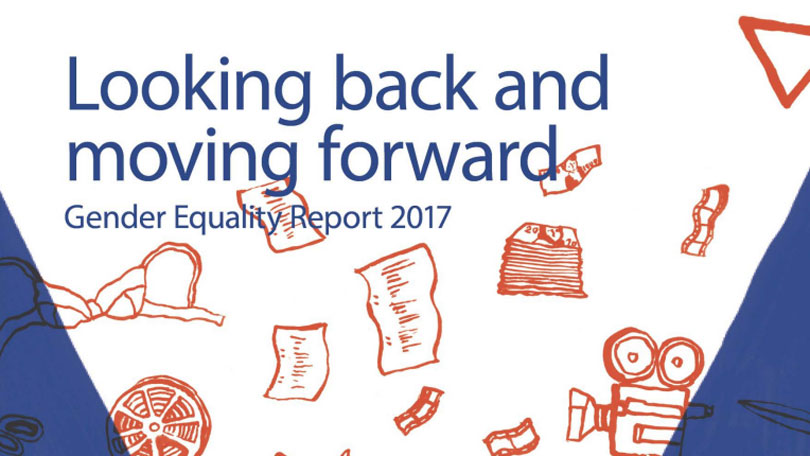 The report was the first of a yearly edition to be published by the Film Institute.
It can be found, and downloaded, below. 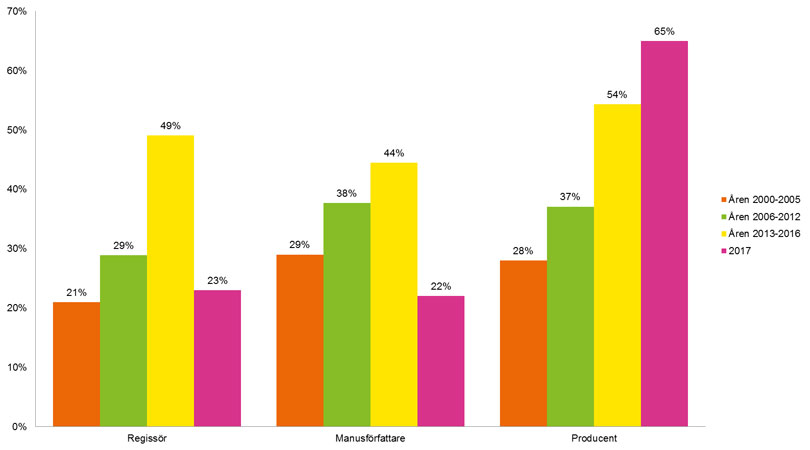 In the Film Agreement of 2013 the gender equality goal was sharpened, with production funding now to be divided equally between women and men. In reality this meant that by the end of the agreement period (2016) the total sum of funding should have been distributed to 50 percent women and 50 percent men, in the professional categories of director, script writer and producer. This goal was very close to being reached, as is shown in the graph, but since there is still a lot left to do (see the slump in the figures regarding female screenwriters and directors during the shorter data period, 2017), the work continues. And as part of the continuing work a new action plan was published in July 2016, called Goal 2020: Gender equality in film production, both in front of and behind the camera. (Read more below)

Everything but the Film Agreement 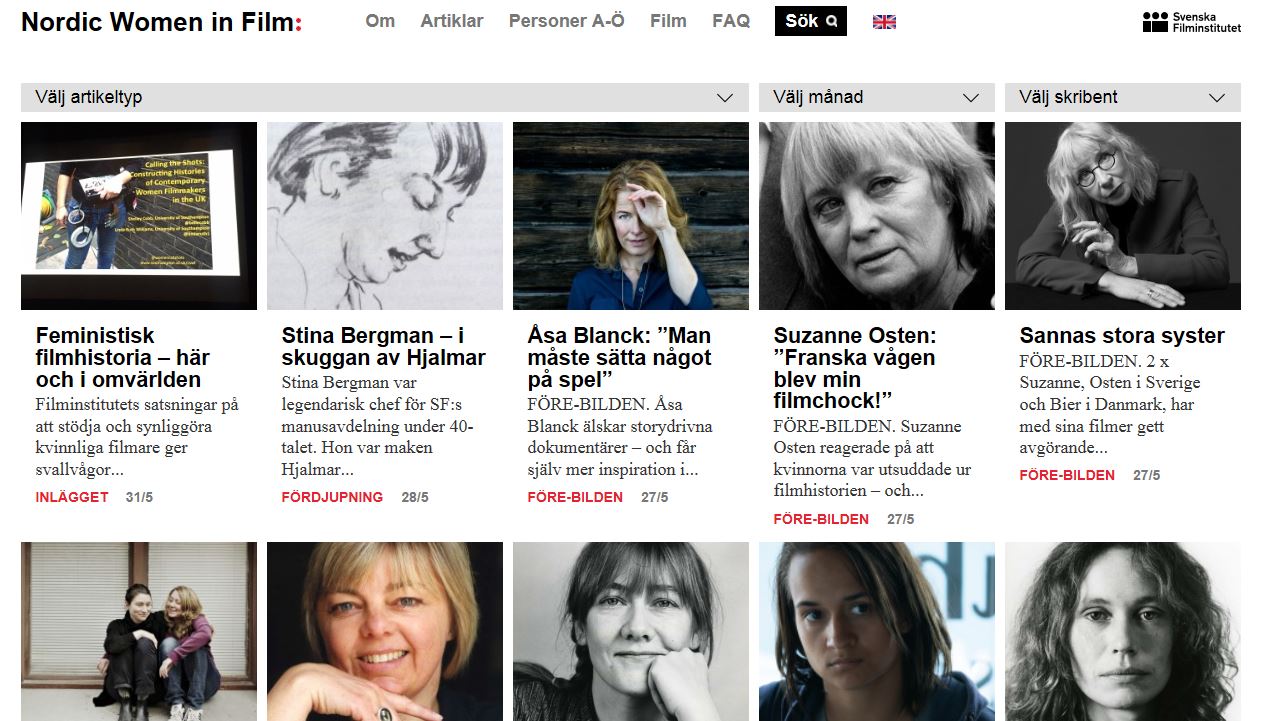 The Swedish Film Institute published the action plan Towards a Gender Equal Film Production in 2013, where some of the steps and incentives that were to help reach the goals were presented. One of the incentives was Moviement, a program for mentoring and change for women directors. Another example is the web site Nordic Women in Film, which was released in April 2016, with increased visibility for women film worker as main objective.

At a seminar during Almedalen Week 2016 the new action plan Goal 2020: Gender equality in film production, both in front of and behind the camera was presented.The plan contains four concrete steps: