"Nothing can replace engaging with a real, physical audience", says Steffen Andersen-Møller, Head of the International Department

Steffen Andersen-Møller is the head of the International Department at the Swedish Film Institute. We thought it would be a good idea to make him paint a picture of the current state of his corner of the film landscape, during these rather trying times.

First of all – how are you? Staying/stuck in Copenhagen for the time being? Do you miss the commuting to Stockholm?

My family lives in Copenhagen. I’m not sure they would appreciate the phrase ‘stuck’, but then again, yes I have been in Copenhagen since mid-march. I do not miss the commuting – but I very much miss my colleagues at the Film institute and I miss Stockholm – especially ‘Vasastan’, my hood in the city.

How have you and your team adapted to these strange times? New routines, initiatives, ways to communicate and meet?

Internally we have kept up the daily work – using all the digital options to connect. Trying to keep normal routines, but adapting to get the best out of working together – apart.

On behalf of the Swedish films and producers we are in touch with the international film community on a daily and weekly basis. Meetings 1-1, networking and group meetings and seminars – and of course we are in close contact with the festivals, sales agents and distributors.

How do you keep up the relationships with the filmmakers, without the festivals? (Or very uncertain festivals later in the year?)

The festivals are in fact very active in transforming into online versions, in many cases both addressing an audience and the market. Actually we experience that the dialogue between festivals, filmmakers and producers has improved due to these uncertain times.
Saying that, we also see many projects and films put on hold and postponing the international engagement. Some documentaries and short films have been invited to, and are participating in, festivals online, but we see most feature films in a more awaiting position. Most films are reluctant to have the initial international premiere online due to less attention and the engagement with a ‘live’ audience.

Speaking of online versions of festivals – what is happening in Cannes this month?

Well, Cannes Marché du Film is moving online – and so are we. As the Swedish Film Institute, and with our Nordic colleagues under the well-recognized brand ‘Scandinavian Films’. The intention is to duplicate the physical market experience in a real time event; 1-1 meetings, networking and several seminars. The Swedish Film Institute is co-hosting a seminar on 50/50 by 2020, with a high profile panel, and Scandinavian Film will arrange five must-join  seminars.

Even if the Cannes Film Festival has been canceled, they have also presented an official Cannes selection. It’s so great to see Swedish Ninja Thybergs feature debut, Pleasure, produced by Plattform Produktion, in the prestigious line-up! The feature film has received an official Cannes Label due to the selection. 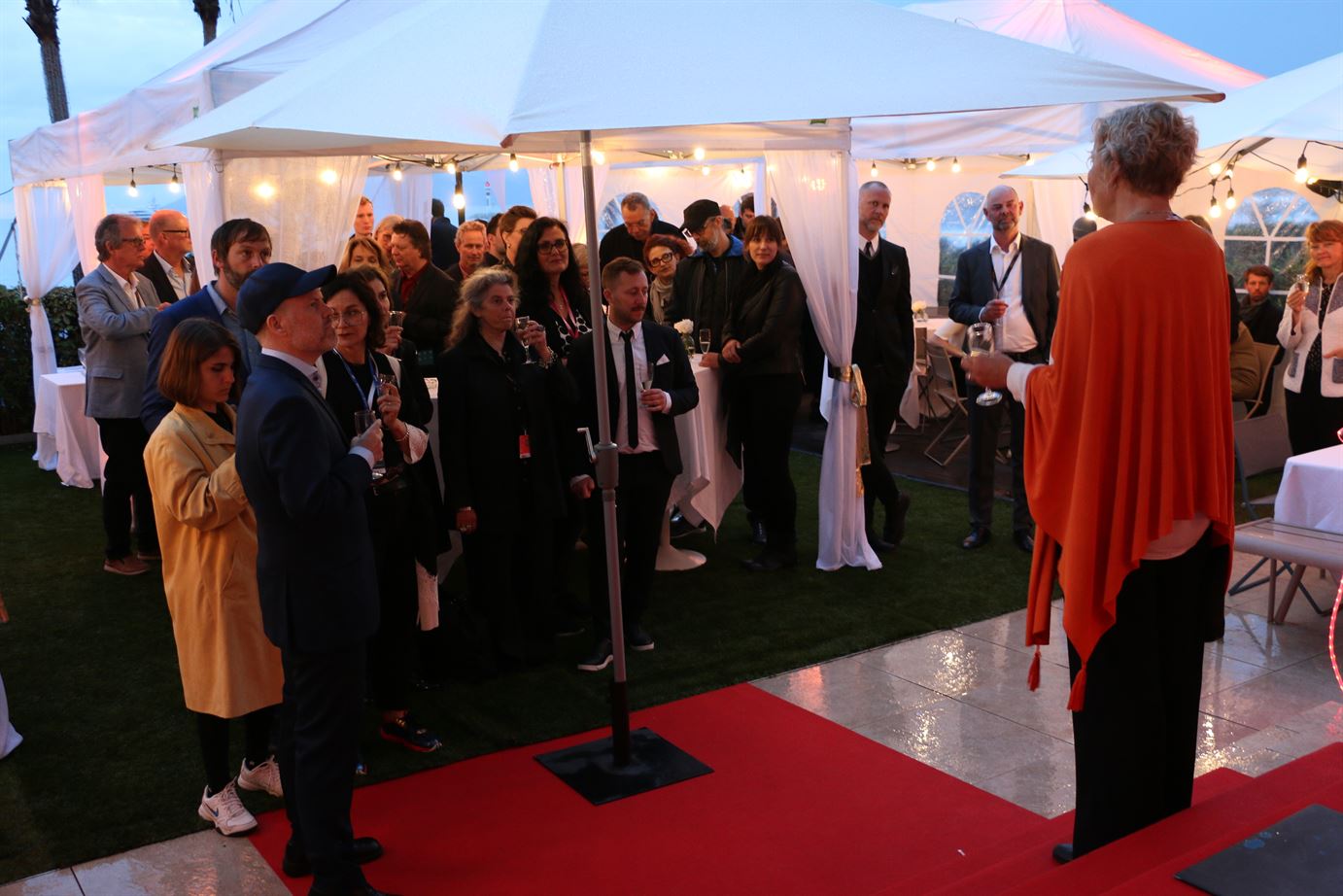 Cannes 2019, a proper physical version. CEO at the Swedish Film Institute, Anna Serner, gives a toast at the cocktail reception on the Scandinavian Terrace, in front of colleagues and guests. Little did we know what lay ahead. Photo: Erik Dalström

Is there a sense of disappointment and negativity amongst the filmmakers you work with? Or is your impression that they find ways of coping?

For films that were about to launch internationally, or had planned for it, of course there is disappointment - and also pressure on the investment that has been made. We have launched different measures to cover and support this situation by introducing more flexible funding schemes and we are looking for what is best for each individual film.

Is there a sense of the film industry “coming together” during these times – or is it each to their own?

You are always on your own when it comes down to it, but there has been a strong sense of ‘coming together’ in the film business, recognizing that the industry is a fragile ‘ecosystem’ depending on mutual dependencies.

Do you think these special times will create lasting changes on the festival circuit? If yes, what would be positive and what would be negative?

You know it’s like the ‘turning point’ in narrative films – you can’t get back to exactly he same position that you came from. Festivals are by no means static – they are dynamic! In the future we will see the festivals exploring and addressing online options more, but only in combination with the physical festival. I think, and surely many agree, that so far nothing replaces the professional networking, the intimacy and the engaging with a real, physical audience.

Do you believe film lovers and cinema goers will come out on the other side of this with different viewing habits?

Streaming has seen growth rates far greater than forecasted, not very surprising due to the circumstances, but the talking about changing habits it is far too early to make conclusions about.

Let’s finish with a couple of streaming recommendations from you – let’s say one international title and one Swedish?

I have two teenage daughters and they hadn’t seen Swedish Show Me Love (aka Fucking Åmål) by Lukas Moodysson – they have now! Also the Swedish sci-fi film from 2019, Aniara, by Hugo Lilja and Pella Kågerman. And, BBC/Hulu produced TV series Normal People got to me!

It got to me too, Steffen. Thanks for the chat!