It all starts in the harbour of Malmö in 1945 and a group of war-ridden women, taking their first steps into freedom. After having documented their stories in two features, filmmaker Magnus Gertten had decided that his work was done. Little did he know that a two second-shot would result in a third instalment, the multilayered journey of Nelly & Nadine.

You’re about to embark for Toronto and the Hot Docs festival. Is this the launching of Nelly & Nadine on North American soil?

It is. In the documentary field, it’s their foremost forum, as the entire Canadian and American doc industry will be present and accounted for. While there, we will also release the news on our American distributor deal. I also look forward to the reactions on this rather thoughtful and possibly slow European story from the audience over there.

The film has already had quite an illustrious journey. Can you give a brief recap so far?

I’ll try. This autumn, we had a final cut. We were then selected for Berlin’s Panorama section in February, which was the perfect lift-off, notwithstanding the Teddy award we got on top of that. Since then, we’ve more or less been invited to every festival we could wish for. This film has great scope when it comes to both universal topics and more niche perspectives – in fact, we weren’t first quite able to predict how it would go down, given the historical setting and whether people would connect. But it has worked really well, within a human rights context, within LGBT-related themes, both applied to then and to our current times. We’ve shown it at CPH:DOX, at the Thessaloniki Documentary Festival, Crossing Europe in Linz, Lovers Film Festival in Turin, possibly the best name of a festival I’ve ever heard, Italy’s oldest LGBT film festival. The requests just keep coming in… Here in Sweden it was shown at the Tempo Documentary Festival and has also had a pretty good theatre run. Doc Lounge, the distributor, has managed to place it in at least 15 different cities. And this is a big screen film as far as I’m concerned. As such, we plan to do as much as possible with it, before we go to the streaming platforms.

Let’s look at another, and bigger, journey. Nelly & Nadine has grown out of two other features of yours: Harbour of Hope (2011) and Every Face Has a Name (2015). Additionally, all three of them contain footage from an SF-journalen newsreel film, Vittnesbördet (“The Testimony”), made in 1945.

Exactly. The newsreel was shown in Swedish cinemas in May 1945, and I saw it for the first time in 2007. It was the footage from Malmö harbour that drew me in, exquisitely well-shot images of these women, taking their first steps into freedom after spending time in camps of various degrees of inhumanity. Increasingly, I got obsessed in trying to get to know everything about them. It all started there. When people saw Harbour of Hope, some would recognize a parent or even in some case themselves in the footage. This lead to Every Face Has a Name, where we try to identify as many faces as possible from the depicted group. At that point I thought that this is it – my work is done. And then, at a screening in Paris in 2016, a couple approaches me about a story for me to bring to the screen.

Did they just come up to you in the cinema?

They had actually seen a trailer of the film already before, and the wife, Sylvie, had recognized Nadine. She then wrote me an email, telling me that she knew this Chinese woman, who had been the partner of her grandmother Nelly, and that they met in a German camp during World War II. We then met up in a bar in Paris. She brought some pictures, and I realised that my work was not quite done yet. This story you could neither improve nor enlarge. Where love conquers war. It’s pure Hollywood, but this one you don’t want to see made there. So I had to make it. To boot I found myself having delivered a trilogy, which in itself felt very pleasing. 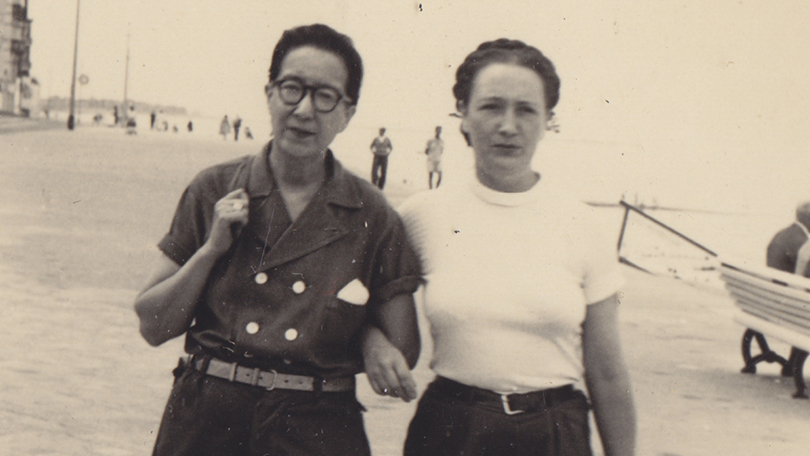 The film gets a unique backbone through the diary that Nelly has kept during her captivity, which then she and Nadine has edited and typed down and which then has wound up in the attic of Sylvie’s home. It’s like they’ve already done an important part of the job for you here.

True – and unique is the word. Our two protagonists are both deceased. There are no interviews, only images. How do we tell the story, hear their voices? There are many such stories out there, told even more fragmentally than this one, and mainly told from an outside perspective. But this diary brings us inside of things. It’s in their, mainly Nelly’s, own words. And that’s unique. Without the diary, it would probably not have been a film at all. I wouldn’t have wanted to interpret their love story. That would have been wrong. In fact, I myself am only present on a few occasions in the film and only when I talk about discovering Nadine in the newsreel. Otherwise, I’m supporting the female voices – of Nelly, Nadine and then Sylvie, the investigator-explorer of the events. Our choice to give her this role is a very important one in the film.

The journey within the film takes us to war-ridden Europe, to post-war Latin America, where we even get to see some 8-millimeter film footage, then back to Europe today. We get to visit a 1930s setting of alternative lifestyles, as more light is shed on Nadine’s pre-war years in the queer societies of Paris, and we get to hear interpretations from the modern French 20th century music scene through Nelly’s singing career. If you wanted, there are at least a handful of good layers hidden within this film.

At least. In fact, given Nadine’s background, there’s already now a short Chinese documentary made about her early life there. But personally, I’d like to think my work is now done. We’ve now created three good films and we will leave it at that very perfect number.

In the newsreel film from 1945, the entire footage of Nadine amounts to two seconds, from which this accomplished new film emanate. You’ve had similar fortunes before, when you did a football documentary some 20 years ago about Malmö FF, True Blue, and came upon this fresh young unknown – one Zlatan Ibrahimovic…

Indeed. There we are in the locker room, and this 17-something young whippersnapper walks in, getting ready for his very first game in the club. Something in his personality made us turn the camera towards him, and gradually give him a main focus in the film. That’s part of the magic when you make documentaries, daring to trust an impulse, catching the moment. And having a bit of luck.

If hard-pressed, who would you say was the biggest find of the two – Zlatan or Nadine?

Well… One of them is so big when it comes to representing a piece of human history of the passionate and mighty power of love. And that will put even Zlatan in the back seat.

Magnus Gertten is born and based in Malmö, where he often finds the themes for his films; True Blue (1998), about the Malmö FF football club, Rolling Like a Stone (2005) the story of a Rolling Stones gig in the city in 1965, and the two chronicles of the World War II survivors arriving in Malmö in the spring of 1945, Harbour of Hope (2011) and Every Face Has a Name (2015). His early encounter with Zlatan Ibrahimovic was further explored in Becoming Zlatan… (2015), directed in collaboration with his brother Fredrik Gertten, himself a prolific documentary director.