Bögjävlar in the 1970s and Today

In this Film Room, which is a part of the program of the international documentary film conference Visible Evidence XX, two generations of activists were brought together for a screening and discussion about the film Bögjävlar (Damned Queers) and its legacy. 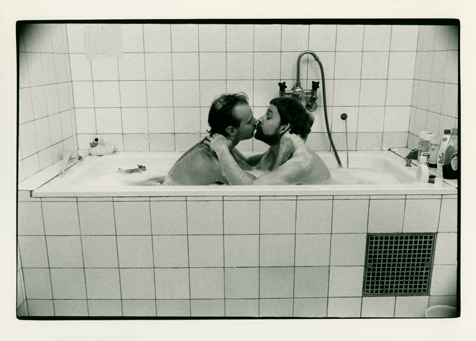 This Film Room was held in English

In 1977 a group of radical homosexual men living together in a flat in Stockholm collectively produced the short documentary Bögjävlar (Damned Queers).

The film documents the men’s discussions about gay and male identity and intimacy, as well as activities such as demos, bathing and group therapeutic exercises. A rare example of moving images originating from within the Swedish gay liberation movement, Bögjävlar holds a unique place in the Swedish queer film history.

This Film Room brought together two generations of activists for a screening and discussion about Bögjävlar and its legacy. What were the purposes and meanings of the film in the 1970s and what has been its reception history since? How does documentary film shape queer memories and archives? How do queer experiences of activism and intimacy translate over the generations?

Gunnar Almér (The Swedish Film Institute), formed part of the group of men who produced Bögjävlar in 1977.

Ingrid Ryberg (moderator, Postdoctoral Research Fellow at Department of Media Studies, Stockholm University and Valand Academy, University of Gothenburg) is researching feminist, lesbian and gay film cultures in the Nordic Countries in the 1970s and 80s.

Roger Wilson (Kino, Swedish Radio) is a film journalist making a radio documentary about Bögjävlar and the men who produced and were in the film. He is also one of the authors of the book Bögjävlar (2007), about contemporary Swedish gay culture.

Marcus Lindeen is a playwright and director, who made his debut with Regretters (2006/2010), both a play and a documentary film about two men who change their sex twice. He is currently making a film with the men from Bögjävlar.